What Playing RISK Can Teach Us About mRNA Manufacturing 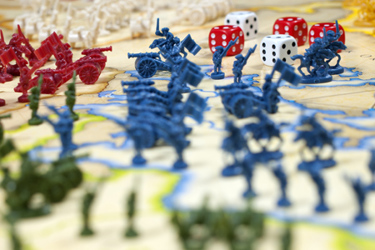 When I was a young, idealistic poet in college, one of my favorite things to do besides writing at summer writer’s camp, was to practice the art of world domination — otherwise known as playing the board game RISK. I was and still am an abysmal RISK player. But, oddly enough, those hours spent playing RISK have come in handy today as I strive to make sense of the nascent mRNA manufacturing paradigm.

On the surface, it may seem as though there is little in common between playing a board game and manufacturing mRNA therapeutics. But as I see it, strategizing, playing, and winning at RISK is highly analogous to the challenges mRNA therapeutics companies will face as they strive to achieve the ultimate end-goal: a well-controlled and understood commercial scale manufacturing process (or, what I like to call the art of “scientific domination”). In fact, I’d even go so far as to say that this board game serves as a prime example of what we can hope for in terms of the future development paradigm for mRNA therapeutics.

Two Different Universes: One Similarity That Rules Them Both

On the surface level, there is one big similarity between playing RISK and developing an mRNA therapeutic: both of these processes are defined and dictated by risk. You make the moves you do fully aware that madness could ensue, which is also why you (hopefully) have safeguards in place to keep any resulting shenanigans in check.

But at the end of the day, the best-laid plans for winning at both the game and drug development can — and likely will — be disrupted by external, often uncontrollable factors.

In the RISK universe, for example, you cannot control dice rolls, the cards you draw, the number of players/alliances you’re battling, and/or your opponents’ preliminary territory selections, reinforcements, and attacks… the list (and game) goes on for hours — or perhaps for days and maybe even weeks…

Likewise, in the real world of pharma, you cannot necessarily predict or avoid economic upturns/downturns; pandemics; supply-chain and capacity constrictions; competitor successes; the patent landscape; and/or unexpected regulatory guidance shifts or clarifications. Let’s not forget that running undercurrent to all these tricky market-centric forces is Science — arguably, the greatest uncontrollable force of them all.

Though all of these market and scientific forces have the potential to be formidable foes, I’d argue that two stand out as the most legendary in the mRNA space today:

But outside of the impossible-to-control external forces you face when playing the game and manufacturing an mRNA therapy, there’s one central feature of RISK that makes the board game universe a great model for those striving to make mRNA therapeutics — and that’s the fact that there are several well-understood strategies for winning the game.

When unfolding the gameboard and selecting your initial territories, you’re not necessarily starting from a blank page. Yes, the territories you end up with are dependent on your dice rolls and the people you’re playing with/against. But you still have a basic instruction manual defining the values of each army piece, continent, and card. There are also well-established “Continent Theories” — and even mathematical formulas — for helping you pick and fortify your territories and move your armies across the board throughout the game. While there are no-doubt disagreements on the countries that are the “easiest” to defend or “conquer,” the continent theories provide you the necessary strategies to help you win the game.

The same can’t be said about developing an mRNA therapeutic — at least not entirely. There’s certainly a lot about the mRNA manufacturing process that is enviable to those working in the cell-based world. There’s a smaller manufacturing footprint, a much quicker (and in turn more cost-effective) turn-around time in creating large batches of mRNA. To some extent, the development process can also rely on technologies that are well understood and already in play in manufacturing facilities.

However, the nascency of this field also means there is no clear-cut process development strategy for arriving at purest and most stable mRNA drug substance. Though seemingly simple on paper, the steps for developing mRNA are still new in practice and vary from company to company, thanks to a wide array of experiences and non-standardized approaches. Though many of the methods companies are relying on today have been successful historically (i.e., batch-based IVT, RPLC purification, T-piece LNP encapsulation), these approaches may not be the most efficient in the long-run. [For more on the future of mRNA manufacturing, I’d refer you to Philip Probert’s great presentation on mRNA at the BioProcess Next Leadership Summit and Expo.]

Despite mRNA’s relative simplicity, there still is much to learn about the molecule itself in terms of its structural-functional relationship and a therapy’s optimal purity to reduce/eliminate unwanted immune responses. The molecule itself (i.e., the size and potential treatment application), the quality of the raw materials used, and the IVT conditions (i.e., time, temperature, buffers, capping enzymes, etc.,) are all factors informing the overall purity of an mRNA drug substance, which, in turn, dictates the downstream purification workflow. The wide variation in up- and downstream approaches is why I can’t help but visualize the industry and its manufacturing paradigm as a mishmash of all the differently colored and ranked RISK army pieces jumbled together in a box.

While playing a board game and developing a life-saving therapy are significantly different endeavors, I’d argue RISK is still a great illustration of the current challenges and future opportunities facing the mRNA therapeutics space — as long as companies take the necessary time upfront on their CMC strategy. RISK’s instruction booklet puts it best: “Unlike most games, RISK demands careful planning before you actually start to play. The initial army placement sets the stage for the battles you’ll fight later on.” I dare say this phrase concisely sums up the central challenge facing the nascent mRNA therapeutics industry. There are a lot of pieces of the development puzzle that must be put in place early on. Whether it be understanding the mRNA analytically during the drug discovery phase, carefully evaluating the quality and impact of the raw materials being used, and homing in more carefully on IVT parameters to streamline downstream purification, there’s a heavy emphasis on preparation.

It will likely be some time before the mRNA space — much like RISK players with their continent theories — have a playbook prescribing the smartest CMC moves. However, we do know this: the most successful RISK player is the one who has the greatest control over the gameboard. The same can also be said of mRNA companies establishing their manufacturing platforms across the world. The mRNA winners will be the ones that can demonstrate to regulators that they have well-controlled, consistent, and high-quality therapy and a CMC strategy to keep it that way, regardless of how the market moves.