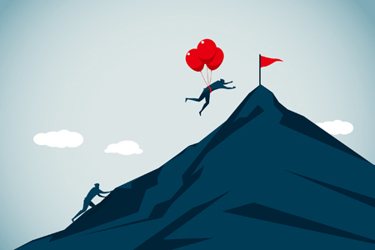 Day-in and day-out, I write, read, listen to, and watch as much content as I can about C&G therapy manufacturing, in particular, and/or other C&G industry-related topics that you should at least be aware of in the manufacturing facility. Every two weeks, I compile the articles and industry updates I think are most worthy of your time into an unconventional newsletter format (below) and send them out via email.

On June 16th, we celebrated “Recess At Work Day,” which is dedicated to building workplace team spirit and innovation. Hence why, in this latest edition of Must-Reads sent on June 16th, I attempt to rekindle the joys of recess with a “live” play-by-play narrative (by A.) and color commentary (by R.) on an industry-wide game of “Capture the Flag.” However, this is not your typical game of Capture the Flag…

Below, A. & R. describe the efforts of three teams: Team Gene Therapy, Team Cell Therapy, and Team mRNA, all of whom are pitted against a fourth team: Team Industrialization.

Team Industrialization is just so cocky, it has challenged all three teams to simply try and capture its flag. In turn, our three heroic teams have joined forces, forsaking each other’s flags to capture the glitter-laden flag of Team Industrialization. Much like this industry, their playing field is rife with obstacles — in this case, a literal swampy forest. Together, these fearless teams must invade this treacherous territory to capture the coveted industrialization flag. Let the games begin.

A: The players are approaching the tree line — Team Gene Therapy is in the lead! The AAVers in particular are coming in hot and — [audible groan] I’ve never seen so many players trip over a single tree root at once!

R: I know, A.— If faceplanting in the mud was the solution to our full-empty capsid ratio conundrum, we’d be halfway to the flag by now. But it does look like a few USP, NIST, and NIIMBL gene therapy teammates are giving our rough-and-tumblers a helping hand.

A: Are some of those USP, NIST, and NIIMBL folks also constructing a bridge out of logs to get across that first mud pit? They’re actually measuring and weighing the sticks they’re using! (Can USP, NIIST, & NIIMBL Conquer The Biggest AAV Quality Challenge?).

R: Now THIS is the kind of collaborative brainpower I’m talking about, A. That more “measured” approach to gene therapy is just what we need to potentially get comfortable with a future that could have more defined limits to that FTE capsid ratio. (Dark Horse Consulting submits proposed draft guidance on AAV FTE capsid ratio to FDA.)

A: I’m also really liking the sight of Team Gene Therapy’s defensive line huddling up just short of the tree line: not only are they comparing how waterproof their shoes are but they’re also comparing adverse events (AEs) from their different AAV trials! Now that is some impressive multi-tasking! (Pfizer, Sarepta Team With Fellow DMD Gene Therapy Makers To Get To The Bottom of Adverse Events)

R: I’ve long argued, A., that this type of transparent teamwork is the only way we’ll be able to get to the bottom of common issues — we can’t be recreating the wheel every time.(Is This One Solution To The AAV Gene Therapy FE capsid Dilemma?)

R: In fact, I think this is why we’re also seeing additional runners gathering vines to build rope swings. This is a clever move that will definitely help more teammates get farther into the swamp. (ARM to host Project A-Gene Half-Day Workshop on QbD, Comparability, Potency Assays — and more — for members on June 29 from 10 AM-3 PM ET.)

A: You know, R., while Team Gene Therapy transforms itself into Cirque du Soleil out there, I want to point out Team mRNA — they’ve only just started venturing into the field. What’s the strategy here?

R: Well, A., I’ll tell you what they’re not doing — they’re not twiddling their thumbs. They spent a lot of time at their home base measuring and waterproofing their flag, finding the most stable place to put it, and figuring out an appropriate defensive strategy. It’s all behind-the-scenes work, but it’s essential — especially for a newer team. (Analytical Approaches For mRNA Therapeutics & Vaccines)

A: That’s a good point, R., — This team is newer to the playing field and don’t quite yet have the experience of playing together as a team like the Cell & Gene teams. So, taking more time upfront on that team strategy is an admirable approach. (Three Key Steps To Unlocking mRNA’s Potential Beyond Covid-19)

R: Well, right now, there are also a lot of ideas and opinions around how Team mRNA should protect its flag and send its teammates into the woods. It can be overwhelming for a young team. (Exosomes for mRNA Delivery: A Novel Biotherapeutic Strategy With Hurdles & Hope)

A: But what a season they’ve had despite those challenges — definitely a team to watch! (The Clinical Progress of mRNA Vaccines & Immunotherapies)

R: Speaking of progress, Team Cell Therapy isn’t looking too shabby, either — this team has had some disappointing matches, but it’s not afraid to get muddy. The team is literally plunging full-speed ahead into the swampiest part of the woods. (Landscape of Cancer Cell Therapies: Trends & Real-World Data [subscription required])

A: What I love about Team Cell Therapy, R., is that it’s not just companies out there, but patients and healthy donors are joining them out on the field. Their contributions are truly one of this team’s secret sauces. (Gilead: CAR-T Still In Infancy, But The Future Is Both Auto & Allo)

R: Do you see Team Cell Therapy’s offensive line wearing shirts called the T-Cell army? I wouldn’t want to get into a tug of war with any of them — they really got jacked for this match.

A: I know, R., — there’s a lot of athleticism to marvel at here within Team Cell Therapy. (Engineered Cellular Immunotherapies In Cancer & Beyond [subscription required])

R: You never quite know what tricks this team has up its sleeve to get closer to Team Industrialization’s flag: we’ve got two people wrestling with snakes to clear a safer, more efficient path — (Manufacturing Challenges & Considerations for Allogeneic Cell Therapy)

A: And don’t forget those players in the trees engineering a system of swinging bridges to improve their trajectory towards the flag.

Editor’s note: This game is far from over and there are still a lot of questions remaining. Who will achieve the industrialization flag first? Will their win be a win for every team? Or will the game change post-commercialization, thereby pitting each of the teams against each other?